Wake up in the middle of the night in a truck stop
Stumble in the restaurant,
Wonderin’ why I don’t stop
–Steve Earle “Guitar Town”
Emmylou singing Steve Earle at the Ryman? Yes, please.
Backstage tour of The Ryman Auditorium…
“The Home of the Opry”
“The Mother Church”
“The Soul of Nashville”
“The Carnegie of the South”
This year is 125 years since the Ryman was built, it sits on a very short list of the most historic music venues in the world.

It being Easter Sunday the auditorium was pretty empty, for a while while I sat in a pew listening to Emmlou’s historic concert recorded here in 1991 I was the only person in sight.
The view from stage right. 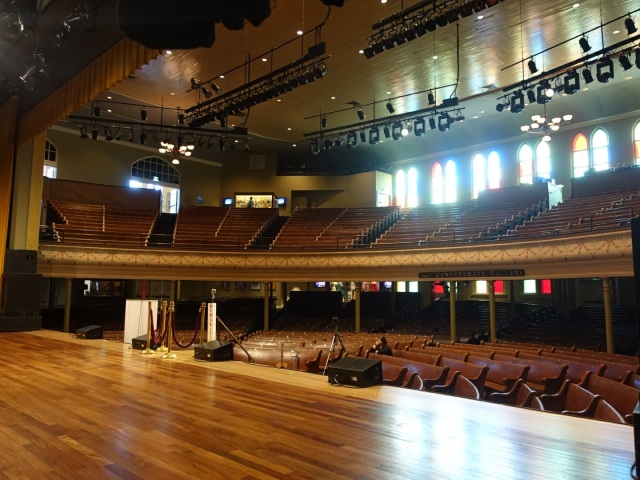 Unfortunately backstage photos are forbidden so I had to take these very quietly.

This is the view when leaving the stage.

In case you are wondering why Emmylou Harris stars in this post about the Ryman there is a reason.
Once the Grand Ole Opry outgrew the Ryman and moved to a larger facility the Ryman sat mostly unused and was likely going to be demolished. In 1991 Emmylou asked if she could record a live album there, the concert hall was taken out of mothballs and an amazing album was recorded.
When the album won a Grammy interest in the Ryman was renewed and eventually a trust was formed to raise the multiple millions of dollars needed to spend years restoring and updating the building.
There are photos of Emmylou in multiple locations backstage and the tour guide spoke of her as an almost magical person for “saving the Ryman”.
The building holds 2362 people and according to the tour guide there were 2362 in house the other night when I was here for Loretta Lynn’s birthday.