Skip to content
deanbergen Uncategorized March 27, 2017October 28, 2017 1 Minute
You didn’t think I would pass up a chance to ride the subway did you!?

The Dallas subway gets instant points for having the best name ever…
Ride the Dart… Dallas Area Rapid Transit!
Ok, so it’s not exactly a subway, it’s light rail that runs partially underground, closer to Skytrain than to a traditional subway, the city of Dallas has actually just approved a plan for a full subway system under the city with construction to begin next year (interesting to see major American cities finally clueing in to the need for underground transit, at least half a dozen are currently frantically digging to try to catch up to what they should have had in the first place)
I rode around for a few hours on the Red Line, the Blue Line and the Green Line. Outside of some downtown underground stations most of the lines are road-level, overhead powered trolly-style electric rollers. The cars are big, Texas-sized even, and cheap, a full day pass for the entire system is $5.
I was not familiar at all with the style of the train cars so did some Googling, turns out the DART is all Kinki Sharyo stock, very fancy, the same Japanese concern that builds the Shinkansen bullet trains in Japan, the Cadillac of Light Rail Transit.

The underground stations are an interesting mashup of Brutalist bricks and Soviet styles that would probably surprise a lot of Texans to learn of. 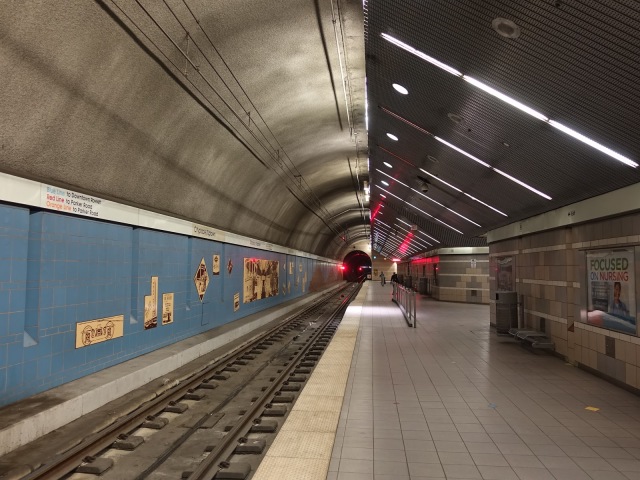