Skip to content
deanbergen Uncategorized April 28, 2016October 28, 2017 2 Minutes
Power keeps cutting out before I can finish a load of laundry, each time I start the cycle I sit fingers crossed but no such luck. Sooo… I’m up bright and early washing my clothes in the sink and rolling them in my travel towel followed by more time in my homemade drying rack or hung over the furnace.

Left things to dry, hopefully, and headed out to the National Art Gallery, two exhibits, one of Georgian Jewish art that was not good and a large exhibit of Georgian Masters, one artist in particular, Lado Gudiashvili kept making me come back around to look again: 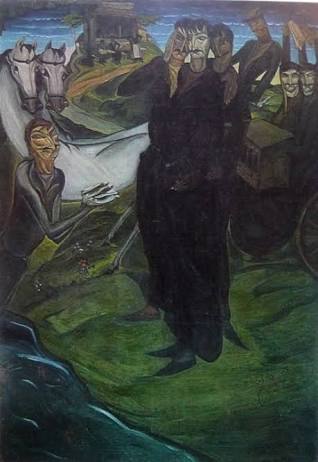 I mentioned to one of the staff how much I liked Lado and she directed me to a different gallery across town that features just his work, hopped subway to subway and headed to the Lado Gudiashvili Gallery, on Lado Gudiashvili Street for more pretty captivating art.

Like most of Europe (really Georgia is in Asia but they want to be European so that’s good enough for me) Georgia has public pay toilets, interesting twist here is that some of them also offer basical medical checkups, blood pressure, etc from the custodian. 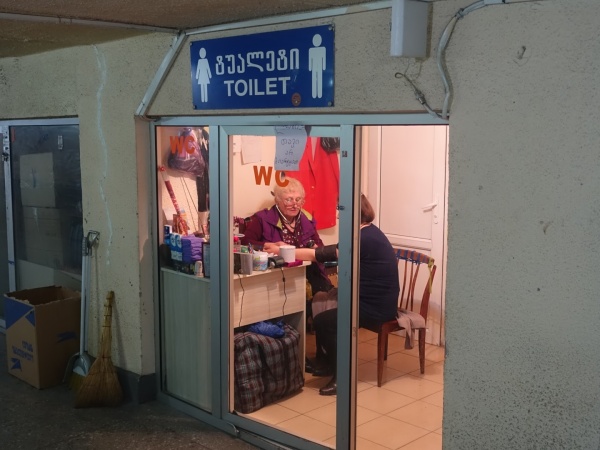 Late lunch of a creamy tripe soup (should really write down the names) and khachapuri and then headed over to the east side of the river to see the Georgian Orthodox cathedral.

I like giant religious buildings, today seeing young 20-something worshippers slowly working their around the cathedral interior touching their foreheads to each image of a saint one at a time I haven’t seen this style of devotion in any other place I have visited, it’s really quite interesting.

Walking around after the cathedral I passed one street vendor with a particularly colourful collection of spices (I assume?). I stopped and took a picture. 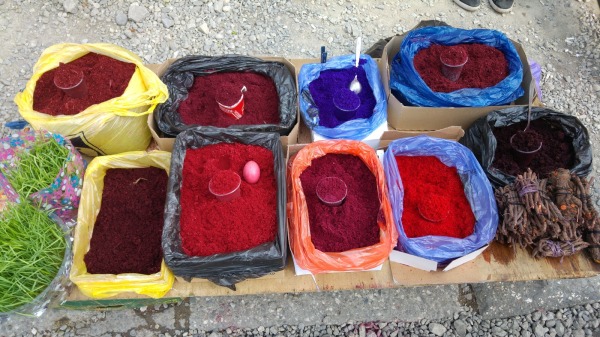 The spice lady jumped up and slapped my arm, tsked and laughed and made one change, then laughed again and said “tah dah!”, spot the difference? 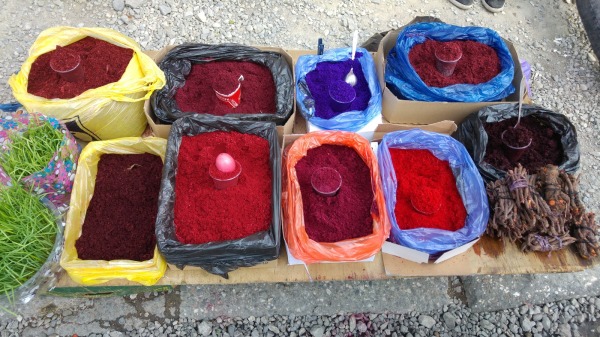 I walked back across to my side of the river and laid out in a park, dozed off for a bit but then felt eyes on me and sat up, a cute, grubby little girl was smiling and soon talking a mile a minute in Georgian, I mimed that I couldn’t speak with her and she laughed and held out her hand. I know it’s not a great idea and I normally wouldn’t but I gave her 5 lari ($2.50).

She ran away whooping… two seconds later half a dozen of what appeared to be her clones came tearing around the corner.  I tried to say no but they were literally crawling on me, clamped to my legs, I gave away the two other bills I had but the remaining two kids just hung on tighter. I spent a few minutes peeling sobbing children off of my legs, feeling like a monster, with one reattaching as soon as I remove the other, eventually I shook them off and basically ran away feeling awful.