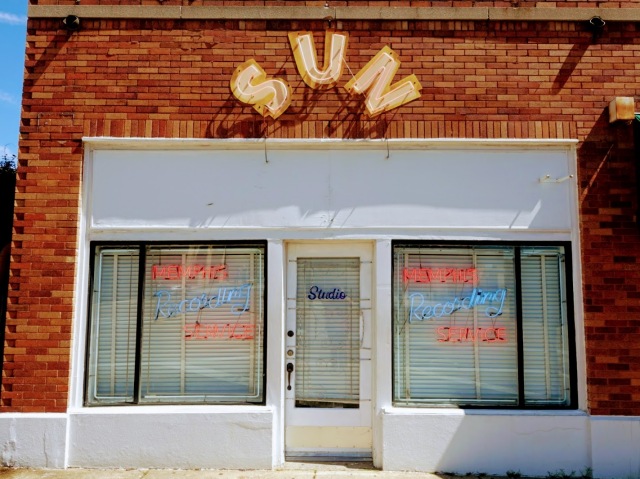 In 1951 while preparing to record a new song “Rocket 88” Ike Turner’s guitarist dropped his amp and tore the speaker cone, with no replacement and no time Sam Phillips stuffed the cabinet full of newspaper and accidentally created the first use of guitar distortion.

You can hear the fuzz-buzz of the broken amp on the final recording too, almost sounding like a saxophone, rock and roll is born.
On Dec 4, 1956 Sun Records hosted an impromptu gathering of Elvis, Johnny Cash, Carl Perkins and Jerry Lee Lewis.
The foursome spent the afternoon fooling around in the studio and cutting tracks. The tour guide played us a snippet today that was Elvis telling the other guys about this amazing new singer he had just seen, Jackie Wilson.
Here they are gathered around Elvis at the piano.

This is the actual microphone used to record the first Elvis tracks, Johnny’s “I Walk The Line”, Great Balls of Fire and the studio tracks from U2’s Rattle and Hum,