Skip to content
deanbergen Uncategorized May 7, 2016October 28, 2017 2 Minutes
What a day this would be if my travelling friends were here with me. There’s rock climbing for James, there’s hanging with me for Candise, there’s tons of Russian history for K & N, I’ve even see a few big BMW’s for Dermo… Almaty would really be a blast with you all here.

Alas you are not, instead I spent today with my new best friends Dennis and Marcus.  Dennis is originally from California, hanging out with a North American voice all day and the fact that none of you guys are here with me has me feeling not exactly homesick but just excited to see you all at Joe’s party when I get home.

Walked around the bazaar, probably the nicest and friendliest one I’ve seen so far, I think it’s called the Green Bazaar. 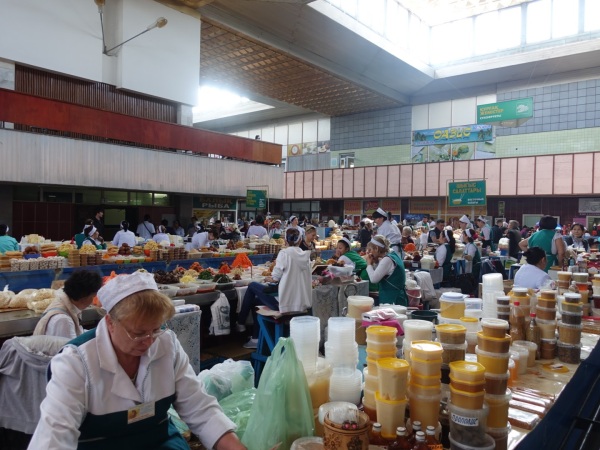 Pickled rooster comb, a bit like a a less chewy version of the pickled pigs ear, not bad, lots of chili.

If you’re thinking these ladies look Korean you are correct, I’ll tell you why sometime as I don’t feel like typing it all.
The cream coloured pickles in between her and Dennis are pickled soy, I first had them in Moldova, they are awesome.

You can’t really see it but there are pails in front of her with more sour milk drinks. Tried kumis (fermented horse milk) again, still terrible, they add ash to it to cover the funk… tastes like funky, fizzy, ash…
Also had the camel milk version, much less awful than the horse version, I could see possibly developing a taste for the camel version, maybe.
Everything you see in front of her are the Kazakh version of cheese, all interesting, a couple actually pretty good if a bit odd. Some of the little dried curd pellets are total flavour bombs and a bit addicting. No pic but also had horse sausage and horse jerky, the jerky is quite good, almost pastrami like. 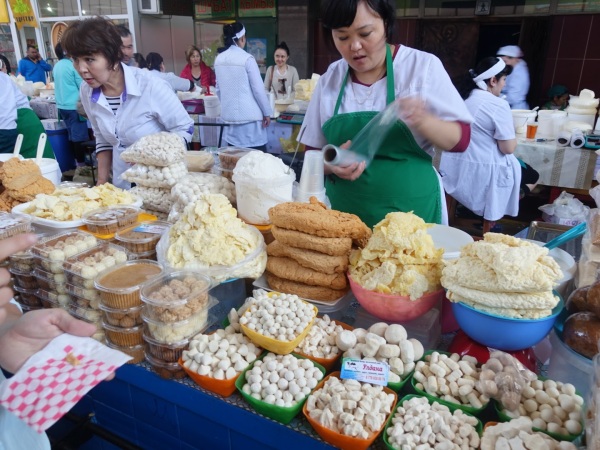 I’ve had dried fruit and nuts from Indio to Vancouver, from Istanbul to Bishkek and this guy (and others in the market) by far has the best I have ever tasted, incredible pecans (they call them American nuts) that taste like candy and the dried fruits are off the hook amazing, especially dried quince.

In the basement under the market there are a bunch of really little, plain restaurants. Went to one for lunch, wonderful food, lagman (meat and noodles) and some sort of garlicy greens and these steamed pockets of meat, all of it really good.
I forgot to take pics at lunch, maybe I will go back again tomorrow, lunch for 3 was about $10.
The place we ate at is run by a Uyghur family from western China, Uyghurs are interesting, an Asian looking muslim people from China who speak a Turk language written in Arabic, wild.
Zenkov Cathedral
Russian Orthadox cathedral in Almaty, rumoured to have been the tallest wooden building in the world when it was completed in 1907 and one of the few large buildings to survive a giant earthquake that hit the city in 1910. 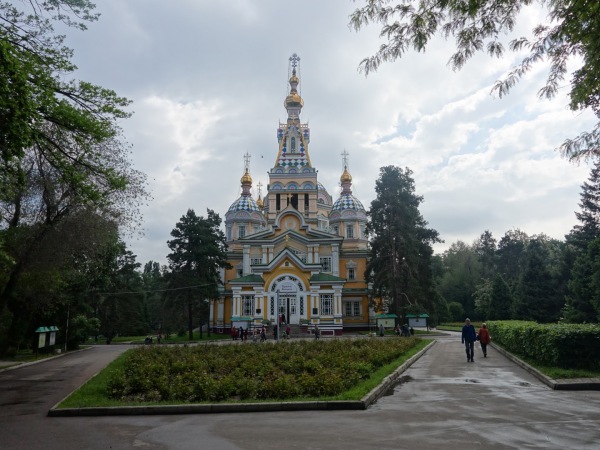 Because of Easter and the mass baptism in the pic below the cathdral was actually a bit of a madhouse.

I’m not going to post yet more pics of parks and statues, so much of that already, I will say though that Almaty is impressive, it appears that the entire city is a park, green-space everywhere.
I would post more but, unbelievably, something I sampled in the market has triggered a little alergic response and my throat has closed up a bit so I am currently back in my room waiting for the benadryl to kick in.