Skip to content
deanbergen Uncategorized May 2, 2016October 28, 2017 4 Minutes
The heat finally eased off today but an epic downpour started around 6pm so I’m back in my room at the guest house after a great day with a guide I found last night.

Valentina picked me up at 9 and we headed out into the city, I know some about the city’s history and its place both on the Silk Road and as the capital of the Timurid Empire and I had walked around plenty last night amoung buildings that I am familiar with but having time with a local is so much better.

First stop was the Tomb Of Amir Timur (Tamerlane in the western world) the last of the great Mongol warlords.

The tombstone of Tamerlane, the largest single piece of carved jade in the world. It looks black most of the time but the tomb is designed so that at each solstace the stone is lit with sunlight and becomes translucent green.

A century after the time of Genghis Khan (Chinggis Khan in the Ridley world) Tamerlane carved an enormous empire in a very short time, reaching from Turkey to China and down into India and Persia, all ruled from his capital, Samarkand.

I saw a letter today in the museum written by Charles V of France to Tamerlane basically saying “You sure are doing great over there, good for you… is there uh anything we could do to convince you to maybe stop coming this direction”

Tamerlane’s grandson was one of the great renaissance men of history, he was painted and remembered by Davinci, he took the title Mirzo (Professor) instead of Amir (Khan). Militarily he expanded the empire to it’s greatest size but his main focus was science. Ulugh built Islamic madrasas where almost all the subject matter was the sciences, in particular astronomy and math.

Ulugh made major strides in geometry and trigonometry and built the premier astronomical instrument of its day: his observatory (pre-telescope) was a huge building with a series of shafts for light and what was basically a giant marble and sunlight sextant that he used to publish the movements of 1018 stars and to calculate the lengths of solar rotation of the planets more accurately than anyone had before and the length of the year more accurately than Copernicus or Tycho Brahe did a century after Ulugh (he was less than 30 seconds off of the exact length of a year and had the Martian year within 10 seconds of exact). Spain and Algeria are both known to have sent their learned men to Samarkand to learn trigonometry and astronomy from Ulugh. I love the idea of your emperor also being your Stephen Hawking.

Less than 20 years after being built the observatory was destroyed by religious zealots, Ulugh waas murdered and all that is left is a small piece of the underground trackway for the light.

Walking around the old city

After the historical tour we went to the produce market and tasted everything, the pickled veggies the lady below had were amazing, it’s starting to rain a bit here so she is covering things up.

Uzbek bread, called non, is considered nearly sacred, and is supposed to be treated with respect. I had read this but didn’t really understand until lunch today with Valentina.
We stopped at a roadside place for grilled meats, the chef brought a plate of non. I actually don’t like the Uzbek bread very much, to my palate it is heavy and dry and tasteless so I didn’t try the bread. The chef came by a few times looking concerned, finally Valentina said “You must break the bread!”. I did and we ate it and some soup and kebab. After lunch Valentina said “You also cannot leave non behind, will you eat it later?”, I told her I likely would not and she asked if she could take it for her neighbor who has very little and is struggling. She taught me the Uzbek word for leftover take-home non but I forgot it.

Uzbek custom includes not just leaving your door unlocked but actually leaving it open, walking around the old town it’s one open front door after another, hard not to love this place. 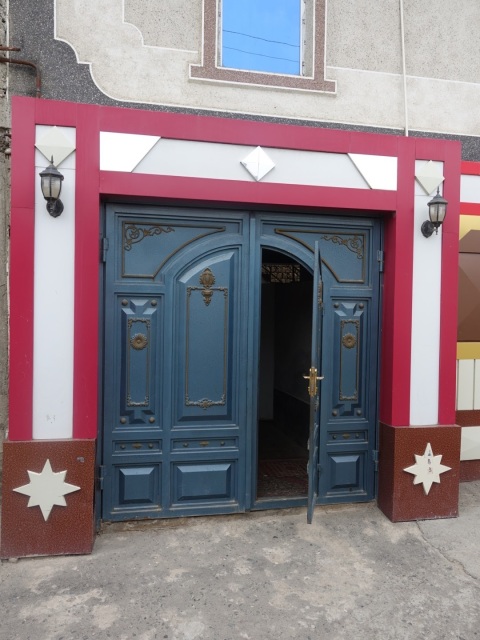 Walking around the old city with Valentina and came across this man cleaning old silver tea sets for sale in the big bazaar, we stopped and chatted with him for a while, discussed what he would do if a genie came out while he was rubbing, yay.

All of today was wonderful but the best part… Valentina was asked to help translate Uzbek to English for what will be new signage for the Necropolis Museum, she asked me for input. I told her the truth, the english she had was fine, she asked how to make it perfect. I rewrote the sign’s text in the way that sounds best to me and we spent 15 lively and fun minutes debating and working with the Museum Director on the wording. Valentina has promised to send me a picture of the signs once they are made with my oh so perfect wording, hahahaha. 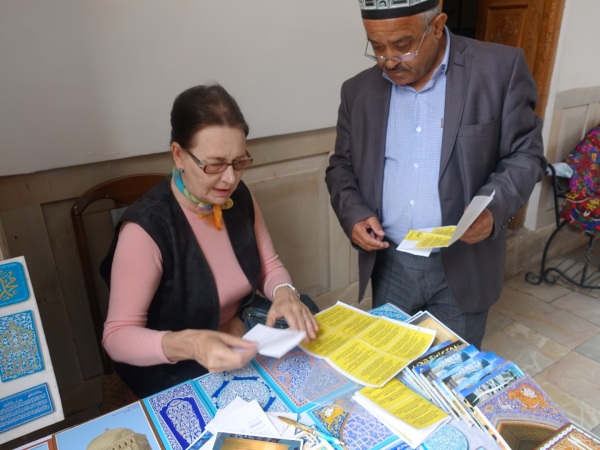