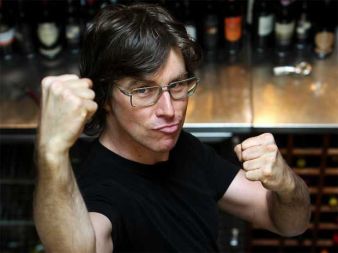 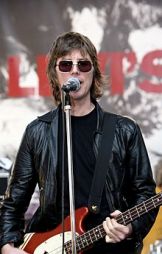 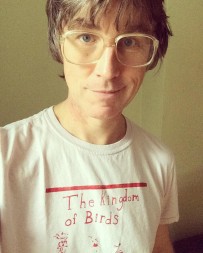 Plays: Mostly bass and vocal but also everything else especially drums.

Style: Obscure British imports of the 70s and 80s

A hipster 20 years before such a thing existed Chris is the voice of the band, the one speaking in interviews and the one gifted with self promotion and humour, when people think of Sloan it’s Chris’ face they see. I suspect that during tougher times it was Chris whose stubbornness kept the band together.

Despite Patrick being the one taking more of the lead vocals it’s definately Chris that people consider the boss, he’s the one talking on stage during shows, handling the inter song banter and amusing the fans.

While the Seattle grunge music explosion was happening in Seattle in 1991 there was a mirror movement happening in Canada, in Halifax, a dozen bands burst out of the tiny East coast city at the same time, led by Chris and Sloan.

Autobiography – “I’m writing ‘young and gifted’ in my autobiography, I figure who’d know better than me” is the most Chris lyric ever. The song is filled with his trademark wordplay, puns within puns within puns, a lovely, catchy, cool tune. The slightly tuneless la-la-la’s is also classic Chris.

Underwhelmed – THE Sloan song, their first single, the CBC recently picked Underwhelmed as the 4th most important Canadian single in history. Shows close wtih this one most of the time. So fucking catchy. That guitar fuzz, the blended voices, this song INVENTED the word “underwhelmed”, not kidding, it was basically unknown before 1991. They sound so confident here, just kids. More wordplay, more jokes, more uber hip cool. Man the way Chris and Patrick blend their voices….

The Other Man – I love a song that takes an unusual viewpoint, I can’t think of many other’s sung from the point of view of the guy she’s cheating on you with. The character is selfish and not backing down and wants the girl, it’s honest. Love the groove on this, Chris’ plucked bass always sounds so sharp in the mix. Lyrics are gorgeous too.  I usually hate bridges, as you know, THIS is how you do them though. “I know that he’s a standup guy but that’s none of my concern, we’ve all been in one situation or another, it’s my turn” ice cold man.

Shadow of Love – Yay! That bass! So rocking, so rollicking! So cool! This is a new one by them but really I think Chris still sounds pretty much the same, what a ripping track.

The Rest of My Life – Another huge crowd favourite, always makes me think of you, you’ll know why, one line.